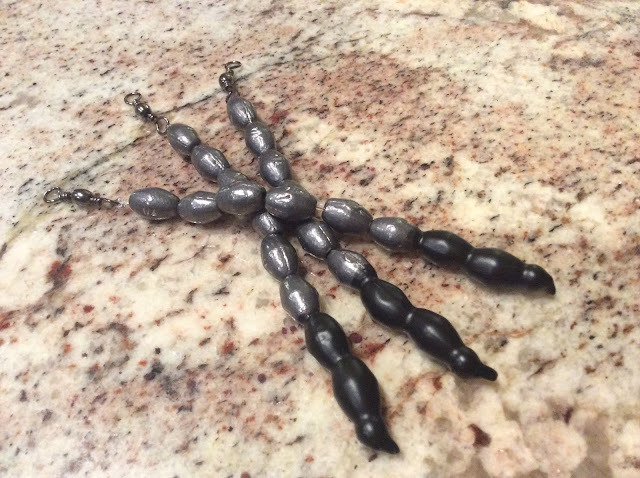 This weekend I assembled some DIY snagless sinkers. I'd been wanting to do more drifting and trolling, so I thought it would be a good idea. The basic idea is that the long, thin shape will slip, slide, and snake its way through underwater rocks and brush rather than snagging. Truthfully, they should call them "snag-resistant" because there's no such thing as a snagless sinker. But I can't think of many things in fishing that are 100% effective.

They're also easy to build. I patterned mine after the Team Catfish Snagless Sinkers.

The parts you need are:

You take a foot or so of line, tie it off to a swivel using a palomar knot. Then string your egg sinkers on, one by one. The bead is strung on last. Finally, tie a simple overhand knot or two in the line snug up against the bead to secure everything, and trim the tag end of the line. You want there to be little or no slack between all the parts tied on the line.

The final step is to coat the last two egg sinkers and the bead in Plasti-Dip. I applied four coats of Plasti-Dip to my sinkers. The purpose of the dip, I believe, is to encourage the sinker to slide through structure easier. I wonder how much it really helps. But if it's good enough for Team Catfish, it's bloody well good enough for me! In any case, don't dip the whole string of sinkers because that will stiffen the entire assembly which will certainly hamper its snag-resistance.

An added benefit of this project is you'll have a lot of extra Plasti-Dip for hours of fun rubber-coating crap around your house!