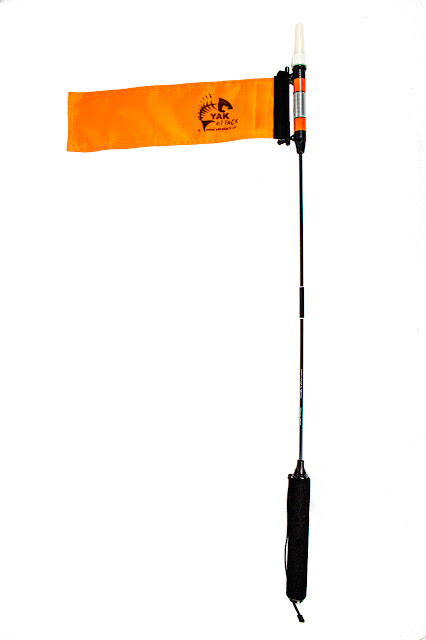 I'd been meaning to post a review of the YakAttack VISICarbon Pro for some time now, but I had a bunch of posts queued up before it. So today we'll finally get to it. I must have some kind of subconscious attraction to products with long awkward names because I sure have bought a lot of them. Just to make this read easier, I'll call it the VCP instead.

The short version is that the VCP is a thoughtfully designed and well made, pole-mounted, kayak safety light. It has a remarkable number of useful features for a product of this type and from a functional standpoint, it's not really lacking for anything. As a guy who designs and markets products for a living, I'm really impressed with how well-considered this product is.


Nail Your Colors to the Mast 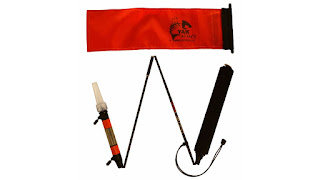 The mast of the VCP is made from carbon fiber for strength and light weight. When assembled the VCP is 48" long, which unless you're an NBA center, is plenty enough to raise the light above your head giving your kayak visibility from 360°. Of course, storing and transporting a 4 foot pole can be a hassle, so the VCP collapses like a segmented tent pole down to a very manageable 14".

Also similar to a tent pole, the pole segments and light are inter-connected via an internal shock cord. The benefits of this arrangement are 1) faster assembly since you don't have to fuss with finding the male and female ends to connect; and 2) you can't lose a segment of the pole when collapsed. The drawback is that a shock cord has to be replaced from time to time. Fortunately, YakAttack offers replacement cords as well as every other part of the system on its web site. And surprisingly, the prices for replacement parts don't seem out of line. 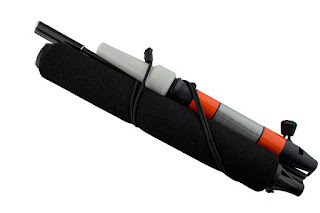 The VCP has multiple mounting options. I have the "GearTrac ready" version which means it has a T-bolt for mounting on a rail system like YakAttack's GearTrac system. I don't have any railing on my boat, but YakAttack still has me covered. The bottom segment of the VCP is covered in high quality foam which fits perfectly into a tube-style rod holder. I have plenty of those. Because it's foam it doesn't rattle around in the holder and it also functions as a float so the VCP won't plummet to the bottom of the lake if it somehow gets jettisoned. A bungee tether on the VCP secures it to the boat in case of a capsize. (It won't sink, but it can still drift away from you!) The tether is also used to wrap the collapsed pole together for tidy storage. If you have any experience with tent poles, you know how useful that is!

The torch segment of pole is waterproof and covered in reflective SOLAS tape, greatly enhancing its nighttime visibility. It contains a 2-LED module powered by 3 AA batteries which are rated to last 100 hours between replacement. That rating seems about accurate given my anecdotal experience. The LED module fires the light directly upward into a plastic diffuser at the top of the torch which redirects the light outward 360° around the boat. This indirect lighting design has the benefit of preventing people from looking directly into the light, preserving their night vision.

Subjectively speaking, the light is about the right brightness level for its purpose. The VCP has enough power to illuminate your yak and help you see what you're doing on and immediately around the boat. It's also bright enough that I think it would be visible from the commonly recommended distance of 2 miles. But it's not so bright that it's going to mess very much with your or anybody else's natural night vision. I don't think it's enough light that I would enjoy navigating by it on a moonless night unless I knew the water really well. For navigation, I augment the VCP with a Black Diamond Spot headlamp. If you do need more light out of the VCP, YakAttack offers a 4-LED module that is a drop-in replacement. I might get one just to have the option because it's not overly expensive and it could come in handy. 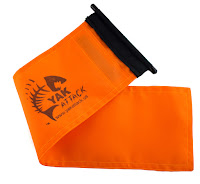 The included flag turns the VCP from a nighttime-only tool into something highly valuable every time you get on your boat. Made from UV-resistant nylon, the flag is high-vis orange and measures 6"x18". This is a good size as it's big enough to serve its purpose of increased visibility but not so big that it creates too much wind drag or becomes a flapping nuisance. The flag attaches using a bungee hook and loop arrangement that is easy to use, silent in the wind, and sufficiently secure.

The flag is also constructed to be a velcro-sealed storage bag for the collapsed pole. It creates a small and tidy package that is easy to store and transport. I put mine in an external pocket on my anchor bag. This very thoughtful feature is yet one more indication of how much consideration YakAttack put into the design of the VCP. The flag/bag can also be draped over the light to decrease its brightness and change it to an orange light, which should attract less insects.

I'm very much a value-oriented consumer. I generally don't buy premium products, preferring to buy at the mid-tier where you tend to get the most bang for your buck but at a good level of quality. Every once in a while though I'll spring for a product that just works so well that it's worth a premium price tag. The VCP is one of those products. The design is extremely thoughtful. The materials and build quality are excellent. All the extra features are genuinely useful and convenient. And it all just works right. While the price for replacement parts seems pretty reasonable, the price of the whole is definitely on the expensive side – $85. No doubt that's pricey for a low-powered flashlight on a stick. But it's a damn nice stick. If I were going to design the perfect kayak visibility light, it would be very very close to the VISICarbon Pro.
Labels: Kayaking Gear Lighting Outfitting Safety