Of Yak Bondage – Strapping Down Your Kayak 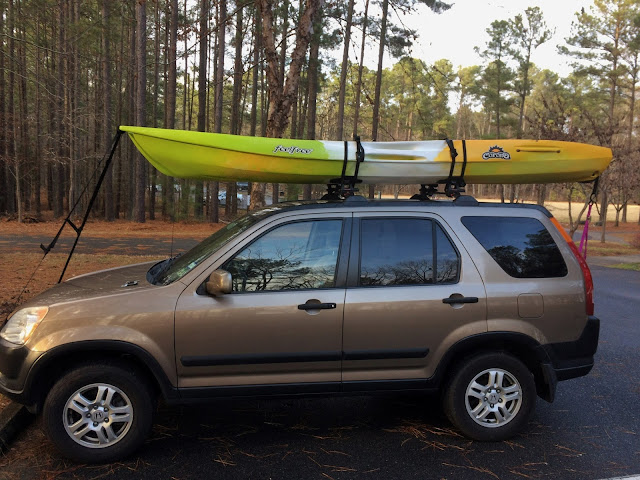 There are a variety of ways to transport your kayak – trailers, roof racks, truck bed extenders, bare roofs, etc. But all of them require you to strap down your kayak.

I recently read a post on a kayak fishing forum where a guy wanted to know how to prevent his bow and stern straps from pulling his boat off the saddles of his roof-top kayak carrier. Hmmm. At first that was perplexing question because I couldn't think of how this would ever be a problem as long as the saddles were properly placed. Well, as it turned out, the fellow had those straps wound up tighter than banjo strings! The straps were off-center relative to his kayak, which is normally not much of a problem. And when he pulled the straps really tight, they pulled the yak right off the saddles! (For the record, you should never need to cinch down the bow/stern straps that tightly.)

That was when I realized that perhaps a lot of people don't understand the hows and whys of strapping down the kayak.

If you have a kayak carrier system, the very first thing I recommend is reading the owner's manual carefully if you haven't already done so. It's probably a waste of time for me to write this since people who can't be bothered to read their owners manuals aren't likely to read a long-winded kayaking blog either. But it's amazing to me the number of people who prefer to "figure it out on their own", but then get it wrong and complain bitterly about the product on public forums. Sigh. In this case however, there's more at stake than just looking like a knucklehead. That kayak carrier isn't just a convenience item – it's a safety item! Take the time to learn how to use it properly.

That said, let's look at the basics that apply to most, if not all, carrier systems.


Step Back From The Bungee

Bungees are good for a lot of interesting and creative things. But tying down a kayak is not one of them. Never use bungee cords or any sort of strap made to stretch for tying down a kayak. This is very important. You want straps that specifically don't stretch. When you hit a bump in the road, momentum and the weight of the kayak will stretch the bungee. On the rebound, the slack in the bungee can cause the kayak to become loose from the strap. Or if the bungee has hook fasteners, the hooks can come undone. Have any doubts about that? Watch this:

There are usually two different kinds of straps used with carriers. The first are the main tie-downs. Typically used in pairs, these are the straps that secure the kayak to the carrier or rack itself. Obviously, the purpose of these straps is to anchor the boat soundly onto the carrier. 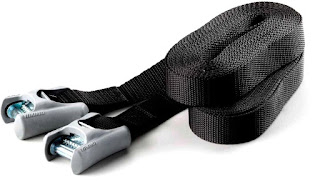 Typically, manufacturers use nylon webbing straps with cam buckles on one end for the main tie-downs. Webbing straps resist stretching and abrasion, so they're recommended for this purpose. If you're putting together your own system, I suggest using the same type of straps.

Following the directions in your kayak carrier's owner's manual, main tie-downs generally wrap around the entire kayak and the crossbar on your rack (or the framing on your trailer). Don't try to get fancy and route the straps through the scupper holes – the scuppers aren't designed for that sort of load and you can crack the hull of your boat. Similarly don't try to route the straps through carry handles or other parts that could come loose.

If you're using a flat webbing strap (as opposed to a round rope), it's a good idea to put put a half or whole twist in the strap as it goes over the open cockpit of your kayak. Otherwise, that long expanse of flat strapping can get a resonant vibration going with the wind when you're driving. It will drive you insane. That also goes for bow/sterns straps.

When tightening the main tie-downs, you want them to be tight enough to prevent the kayak from moving, but not so tight that the straps deform the kayak. Remember that you're dealing with a plastic boat and that it tends to soften in warm weather. Over-tightening the straps can permanently warp or dent your kayak. Tighten them enough to take out all the slack, and prevent movement when you grab hold of the kayak and try to move it. But don't "lean" on the strap when tightening it. If you're one of those more-is-better types that tend to strip screws and rub off finishes when cleaning, you need to keep those OCD tendencies in check!

For the same reason, you want to avoid using ratchet straps like you'd buy at an auto or home improvement store. Ratchets are designed to produce a lot more mechanical leverage in tightening the straps than you could ever achieve with a plain strap and cam buckle. And it's hard to tell exactly how tight you've got those ratchets because the mechanism itself provides no tactile feedback on that. Just one too many turns of the ratchet and you could be in kayak damage territory. If you have to use ratchet straps, be very wary of over-tightening them.


Business Up Front, Party In The Back

The second type of strap used with most carriers is the bow or stern strap. Bow and stern straps can be made from nylon webbing or rope. These straps tie the ends of the yak to the ends of the car. They often come with some way of adjusting the length and tension of the strap, like a strap adjuster. But a bow/stern strap doesn't have to be fancy or purpose-built. A plain rope and some knotcraft will make a fine bow/stern strap. 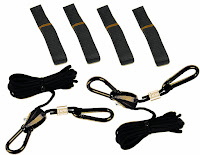 It's important to understand that bow/stern straps are not for securing the boat to the carrier. The main tie-downs do that. Bow/stern straps have two other purposes: Primarily they are a fail-safe to keep the kayak from flying off the car and becoming a airborne missile in a forward collision, emergency braking, or rear-end accident situation. The potential for serious damage and injury is very high, so don't get lazy and skip the bow and stern straps, even for short trips. You do not want to cause something like this:

The second and lesser purpose of bow/stern straps is to prevent yaw rotation. Yaw is where the wind forces rotate the kayak around the vertical axis like a helicopter propeller. Yaw rotation is probably unlikely except in a heavy cross-wind situation, or if the rack crossbars aren't very widely spaced. Being tied to the ends of the kayak, bow/stern straps have greater mechanical leverage to prevent yaw than the main tie-down straps.

To accomplish both of those tasks, bow and stern straps don't need a lot of tension. And because they tie onto the ends of the kayak, over-tightening the bow and stern straps can warp your boat like a banana! The bow/stern straps should be even less tight than the main tie-downs. Tighten them just enough to take out the slack but short of applying much tension to the ends of your kayak. Hand tightening them with very modest arm strength applied is what you want.

Depending on how your kayak is configured, you might want to use some motorcycle tie-down loops to attach the bow/stern straps securely and prevent scratching your boat.


Fit To Be Tied

For both main tie-downs and bow/stern straps, you'll want to secure any excess strap. The flapping in the wind will not only be irritating, but it could possible work the straps loose as well. And the heat from your vehicle exhaust can melt a stern strap that's too close.