Kayak Lighting, Part 3 – What I Use 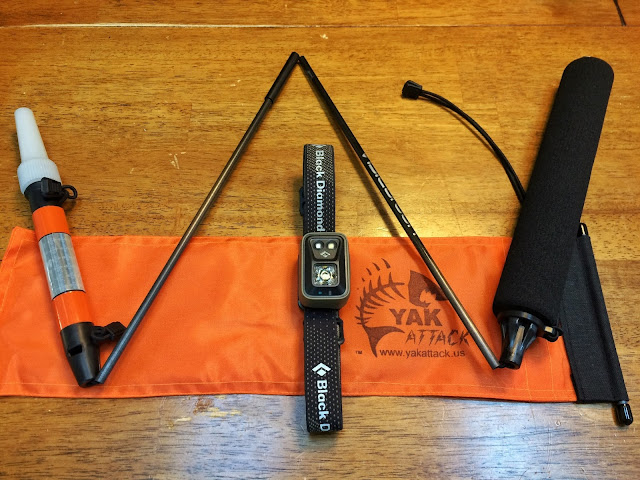 So with all the theory of my last two posts in this series out of the way, what do I actually use for lighting? Well, not much actually.

For visibility lighting I have a YakAttack VISICarbon Pro that I mount in a rod holder just behind my seating location so I can easily turn it on and off. All things considered, I think it's one of the best lights of its kind currently on the market. As a visibility light it's pretty ideal. The light is elevated over my head so it can be seen by others from any angle. It's bright enough to be seen from 2 miles away. And it has a surprising number of features. But I'm not going to list all of them because I've got a full-scale review coming out next week.

The VISICarbon works well as a close-proximity illumination light as well. It provides enough illumination to see what i'm doing in the boat and the water immediately around me. But it's not so bright that it degrades my natural night vision – I can turn it off and not feel like I've been cast into pitch black. I also use it at the boat launch when prepping or tearing down in the dark. It's probably kept me from losing stuff in the dark multiple times. And it pulls double duty, providing a nice safety flag in the daytime.

The VISICarbon handles most, but not all, of my illumination lighting needs despite being a low-powered light. In most normal situations, you really don't need that much light. One exception is when I am finding or fixing something small – like tying terminal tackle. Another exception is when I need to illuminate something more distant, such as when I'm paddling along the bank looking for good structure to fish. For those instances, I have a Black Diamond Spot headlamp. I posted a full review and even a user's manual (the included manual is pretty dismal) for it awhile back. The Spot has more than enough power for my purposes. It also has a red light mode which you can use to get more illumination without screwing up people's night vision. And there's a strobe mode in case of emergencies.

As I mentioned in my previous post in this series, I don't use fish attractant lights. I've nothing against them. I just haven't pursued it.

I don't really have any aesthetic lighting either, other than the fact that I think the VISICarbon looks pretty spiffy. Not really my thing, although I enjoy seeing other people's efforts.
Labels: Lighting Outfitting Safety