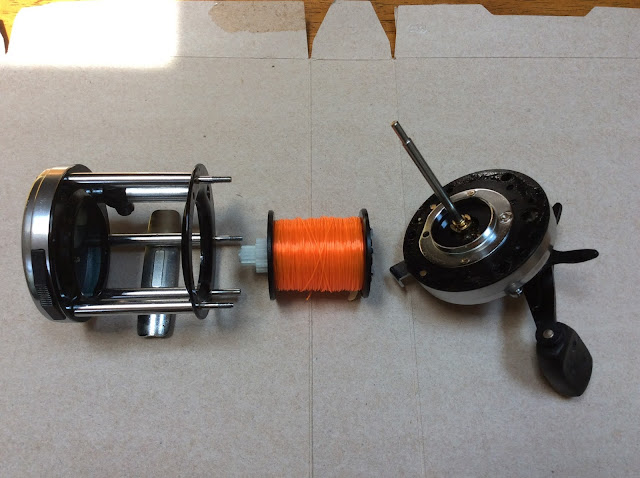 This last weekend I spent some time cleaning and lubing one of my Abu Garcia Ambassadeur 6500C3 reels. I love these reels. They made me a big Abu fan. But this particular one hadn't been casting very well for the last month. So armed with the instructions on the Catfish Edge web site, I opened her up.

The Swedish-made Ambassadeur round baitcasters are a true classic. They don't have all the fancy features and ergonomic designs of whatever the latest bass reels are. But they're elegantly simple and have a long-standing reputation for quality. If you take care of them, you can pass them on to your children. And notwithstanding the issues I'm having with mine, they'll cast very long distances.

Having now taken one apart and re-built it, I have even more respect for them. Disassembling it, examining the innards, and seeing how it works, I got that same feeling I get when I peer into the chassis of an old Hiwatt tube amp, or look at a vintage Leica or Hasselblad camera. An admiration for old-fashioned quality, when reliability and serviceability were held in higher regard than number of features and minimizing Cost Of Goods Sold. The Ambassadeur reel is simple, purposeful, well-laid out, with good parts quality, and built for service.

The instructions from the Catfish Edge site were spot-on. The only issue I ran into was my own ignorance about mechanical parts jargon. For example, I had no idea what a "pawl" was. But some quick Google searches cleared up all questions as they arose.

One particularly great piece of advice that Catfish Edge gave was to use an egg carton to store the pieces as I removed them. I discovered that that particular pearl of wisdom was essential because there were a lot of small parts that were easy to lose and even easier to forget where they went. Having the parts nicely separated and organized made things go much smoother.

For tools and lube, I bought an Abu Garcia Maintenance Kit. I could have used any reel lube and I already had the proper tools, but I figured you can't go wrong using the original manufacturer spec'd stuff. It's actually a really nice kit with a good quality, drop-forged, open-end wrench; a not-as-nice-but-still-adequate screwdriver; grease; oil; degreaser; cleaning brush; and a cleaning cloth. All in a very nice carrying case so you can keep it at-hand with all your other fishing gear. For home use, it's a very handy little kit. 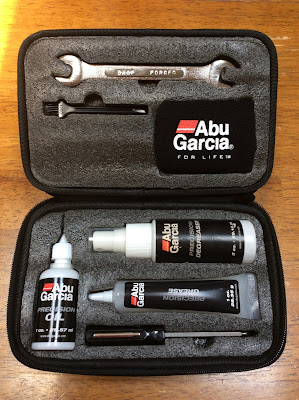 There were a number of pieces to clean and lube, and it was my first time, so it took awhile. After I got my reel back together, I was disappointed to discover that I'd somehow introduced a "catch" in the reel action: While turning the handle, I could feel a periodic spike in spinning resistance, like a bicycle brake pad that rubs against a particular spot on the rim on each rotation. Not good. That would surely make casting even worse. I didn't have time to take the reel apart again right at that moment, so I decided that I would try the re-build again later in the week when I had some more time. And if that didn't fix it, I would take it to a pro and let him figure it out.

However, an hour later I was thinking about it over a green chile burger, which is often when the best ideas occur to me. I thought of a good test to help diagnose the issue: If the catch occurred at the same point in every rotation of the handle, then I would know that the root cause was somewhere along that main drive shaft connected to the handle. If the catch occurred in sync with the spool, then it was being caused by something along the spool, its axle, or where it meets the reel housing. And if the catch wasn't in sync with either the spool or the handle, then it had to be caused by something in the gearing that converts 1 turn of the handle into 5.3 turns of the spool (the 6500C3's gear ratio).

So after dinner, I ran my test and observed that the catch happened at exactly the same spot in each rotation of the spool. I spun it a few more times and realized exactly what the issue was. In prepping my reel to be serviced, I taped down the fishing line using masking tape. The tape was a little too long and it extended past the spool by about an eighth of an inch on both sides. The tape was sticking to the reel frame in the same spot on each rotation. Perhaps that spot in the housing is slightly off-round. I pulled the tape off, tore it in half and re-secured my fishing line with a shorter piece of tape.

Voilà! That fixed it!

Unfortunately, I didn't have time to see if my cleaning and lubrication fixed the original problem – the casting distance. But subjectively I'd say the reel seems to be operating more smoothly now. So I'm hopeful that this will fix that problem. Later this week I'll put a dummy weight on it and test it out. Or maybe I'll have to test it on the water. In any case, I'm crossing my fingers... [Update: The reel is casting well again!]
Labels: DIY Fishing Gear