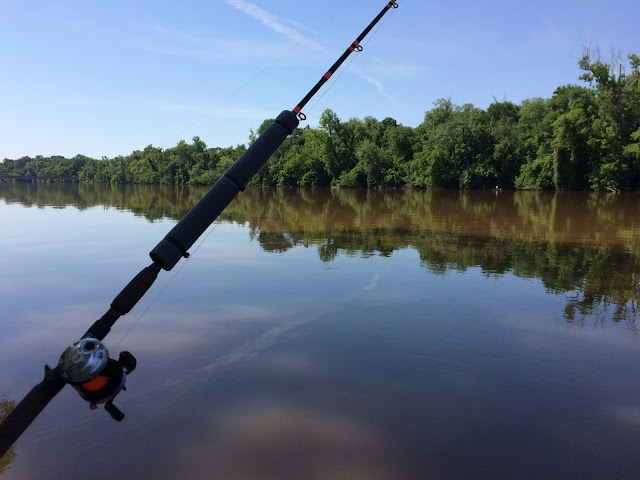 I had a fishing-filled Memorial Day weekend. On the big scale, I really can't complain too much when I'm getting to fish. But I gotta say, that this weekend really tried my patience.

As I mentioned in my last post, I was on a mission to fix my bait fish problem. Namely, to find a way to get sufficient bait fish reliably. Well, I mentioned this to a buddy at work who told me about a little pond behind an office building in Raleigh. He said that the pond is filled with panfish. He didn't know exactly what kind they were, but they were plentiful. "All the bait you need in an hour. I guarantee it."

Of course, he had me at, "Filled with panfish." So I took my family there on Friday evening after work. The location is an office building campus right next to a walking trail. It is the epitome of "suburban fishing hole" – clean, well-kept, safe, but more of an idealized re-creation of nature than actually being natural. There's a small footbridge that goes over the pond and it has virtually no traffic. So you can fish from the bridge and not be disturbed – and not disturb anybody.

The night before, I'd set up our light-duty fishing rods with drop-shot and small jig head rigs. My plan was to fish vertically off the foot bridge. Despite all my prep, when we got there I'd forgotten the nightcrawlers I'd bought for bait! So I set my kids and wife up with plastic grubs, then I went to the nearest Walmart.

Unfortunately "nearest" meant 15 minutes each way. When I got back a half hour later, my oldest son had caught one but everybody else was getting skunked. We took off the plastic grubs and starting using pieces of nightcrawler.

And that's when the fun started.


It was literally drop in and feel a nibble within 30 seconds. My kids had a blast and I got to work on some more finesse style fishing, feeling what the fish was doing through my rod.

The fish turned out to be green sunfish. Most of them were small juveniles, maybe 2-3 inches long. And that was just fine for bait fish. A big one would be maybe 6 or 7 inches and we only caught a couple of those. In total, we caught about 30 fish. Not bad for an hour's fishing.

So now I appear to have my bait fish problem solved.

I kept the fish overnight in an aerator bucket. The next morning, one fish that had been gut-hooked had died. But all the rest were very live and frisky. I headed out early that morning to the Cape Fear river with my fresh bait in tow.


It was a beautiful morning, but it had been raining all week. So the Cape Fear was very high, muddy, and faster flowing than the last time I was there. There was a fair amount of debris floating down river as well. Not ideal fishing conditions. But I had my bait and I was going to fish come hell or high water. (Do you see what I did there?)

Well, it went about how you'd expect it to go. The cats were simply not biting. I fished the bait fish live. I fished them cut. I tried a lot of different locations. I trolled with them. But no luck. Finally, I set up one rod with a treble hook under a float to see if I could salvage the day with some channel cats. I had a little bit of luck there. Caught one decent eating-sized cat and a fingerling, which broke my previous record for smallest catfish I've ever caught.


Interestingly, while I was hand-holding the channel cat rod, one of my other rods finally got a bite. That rod had a Santee Cooper rig with a big 8/0 circle hook and a live green sunfish as bait. When I reeled it in, it was a white crappie which was surprising. I wouldn't have guessed that a crappie would go after that big of a bait fish on a relatively massive hook. Minnows sure, but even the smallest sunfish I had were 3 or 4 times the size of a minnow. I guess it's further validation of my theory that every fish is Jaws when it comes to smaller fish.

I did manage to bring my video camera on this trip. I will probably post a video this week. But unfortunately, it won't include any footage of my catches because the battery died by that point. Sigh.

9 hours in a kayak on the river. Sweaty. Hungry. Tired. Sore. Semi-permanent brown gloves from not putting on sunblock. And only 3 fish.

My oldest son loves panfish. Catching them sure, but also eating them! We learned a great way to cook them on one of his Scout camping trips: Clean them. Put some butter inside the gut cavity. Then wrap them in aluminum foil with more butter, chopped onion, salt, and pepper. Then cook the package on campfire coals. He loves them that way!

My wife promised that we'd keep the two largest green sunfish for him. But like a knucklehead, I forgot and used them as bait. So my wife volunteered to take him to Bass Lake near my house to catch some panfish to eat. Well, I'm not going to pass up that opportunity! So the 3 of us headed out and left my youngest one at home (he'd had his fill of fishing for the weekend).

Same rigs as on Friday. We fished from the small dock they have. This time we caught bluegill. We only kept the ones big enough to be worth the effort of cleaning and eating. We fished for a couple of hours and caught about a dozen keepers and several others that we released.

While fishing on the dock, I noticed that the catfishermen were doing very well. In fact one boy in a canoe caught the biggest channel catfish I've seen out of Bass Lake. That kind of lodged itself in my lizard brain...

We went home and cooked the bluegill up for lunch, using our camping recipe. Except I substituted the campfire with the barbecue grill. Still quite tasty!

That afternoon I cut down a couple of small trees in our yard. One had died and the other was a scraggly looking cedar tree that just couldn't get enough light to thrive. The cedar was actually rather beautiful on the inside and my wife suggested saving a log of it to make drink coasters with. I thought that was a great idea so I did.

That night I had the worst case of insomnia I've had in a long time. I don't know why. But I didn't get to sleep until about 3:00 AM.

But on Monday I still woke up at about 6:30 AM, as my body is programmed to not sleep in, even when I really want to. A cup of coffee and I was in decent enough shape to contemplate the rest of my day.

The memory of that kid pulling the big channel cat out of Bass Lake was still playing itself in my head. I had a bit of time before everyone else woke up, so I decided to seek some catfish redemption. I could only spend a couple hours at it because I'd already used up all of Saturday fishing by myself and I needed to spend more time with the family during the holiday.

Now, channel cats are my confidence-building fish. As long as the conditions aren't outright unfavorable, I can usually catch some.

But the gods apparently wanted to teach me something about hubris.

I got skunked! And in the most frustrating way. I fished on the bank with several other people. Everybody was doing fine, except me. 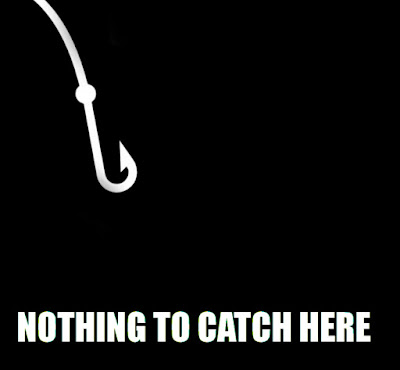 Why? Because I couldn't keep my damn bait on the hook! For some reason, the punch bait just would not stay on. I know that a lot of people have issues with that, but I'm not usually one of them. But on Monday it flung off my hook on damn near every cast. At first I thought it was because the bait was a bit too cold, which can cause it to fall apart easier. I figured it would sort itself out once the sun had warmed it up a little. But that didn't work. Then I thought that perhaps I hadn't whipped the bait into a proper texture, so I spent some time doing that. That didn't work. I tried swirling the bait around the hook. I tried forming it carefully with my knife into perfect little balls of stinkiness. I tried using less bait. I tried using more bait. I tried everything I could think of other than putting it on with my hands, which I won't do because even when the bait won't stick, the stink definitely will. None of it made a difference. That shit just wouldn't stay on!

Finally, I put a sponge hook on my line. That worked better, but after just a few casts, I lost the sponge! By that time, I needed to head home and get some quality family time. I hated leaving though, because I really wanted one fish just to salvage the day. But it was not to be.

I spent the rest of Memorial Day relaxing at home with the family and playing board games. That evening we went out to eat at our favorite barbecue joint. So it ended on a high note.

That brand of punch bait has always worked well for me in the past. So now I'm wondering if that batch of bait just didn't have enough fiber in it, or if the fibers were too short to keep the hook from slicing through it when casting. It will be a major drag if that's the case because that bait came from a big one gallon bucket I bought not long ago. I made several homemade sponge hooks just in case. I also tried adding some shredded cotton balls to a smaller jar of the bait, but that didn't seem to change the texture much. It's not surprising when I think about it: Cotton tends to mush out when wet. I think I will try to add some hair next. I need to get a haircut next weekend. She'll think I'm weird, but I'll ask the hair cutter if I can have a small bag of it...

So it was a very mixed bag for fishing. Lots of panfish. Hugely unsatisfying on catfish. But like I said, I have to check my complaining because even when the fishing sucks, I'm so lucky to get the opportunity to do it. Especially four times in one weekend.

And I did have one unqualified success: It looks like the bait fish problem has been solved!
Labels: Bass Lake Cape Fear River Trip Report