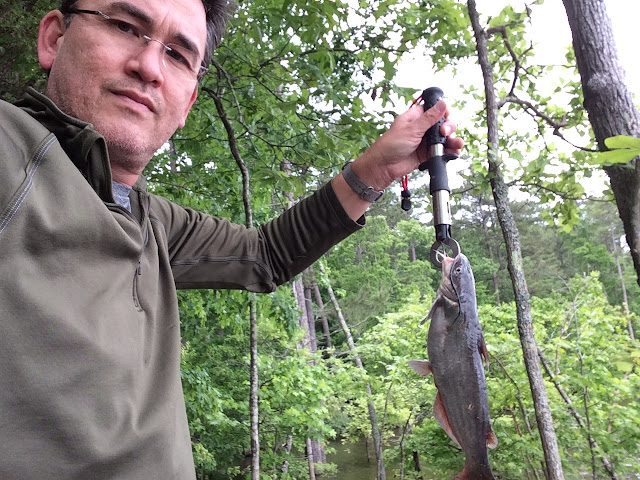 This weekend the family went on a camping trip with my youngest son's Cub Scout pack. We went to Falls Lake near Durham. This is one of the "big 3" lakes in the Triangle area. Falls Lake is three times the size of Shearon Harris, my home lake, and it's better set up for recreation as there are several campgrounds, swim beaches, and access points.

We stayed at the Rolling View campgrounds, which is right by the water and very nice. The campsites are reasonably spread out so you get decent seclusion, which is the whole point of camping in my opinion. 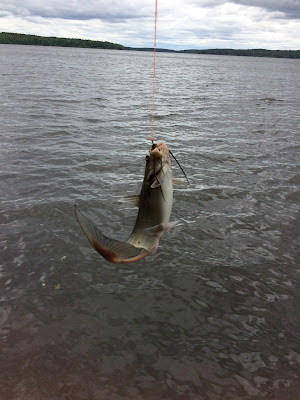 I didn't bring the kayak since I wasn't sure if I'd have the time and water access to use it. But as I learned, I should have! Still, bank fishing was a lot of fun and very productive. 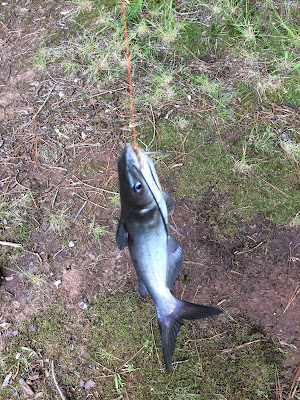 I caught a lot of fish! I spent several hours at it on Saturday and caught about 20 channel cats and 1 bullhead. They were all very small. The biggest one was maybe a pound and a half. I went into it intending to catch-and-release everything. But even if I were looking to take some home to eat, all but a couple of the ones I caught would be too small for me to want to bother with. But it was still good fun catching them. 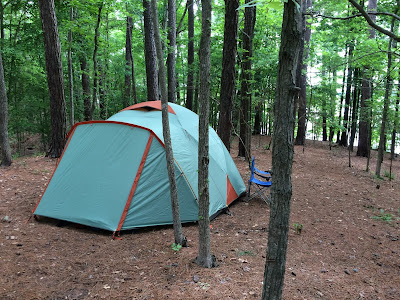 This was the first camping trip with our new family tent, an REI Base Camp 6. Until now, we've always camped with a pair of 2-man backpacking tents I've had for over 15 years. They're great tents and have stood up to genuinely torrential rains. But they divide the family between two tents and that's a drag. So I'd bought the Base Camp 6-awhile back to use on these kinds of trips. I wanted a good quality tent that would last as long as my backpacking tents. I also wanted one that was a simple dome design with a small number of poles, all of which touch the ground on both ends when assembled. I think that those designs are easier to pitch and keep their composure in wind and heavy rain a lot better. I also wanted a rain fly that went all the way to the ground, which is a lot better for rain. And of course, any tent needs sealed seams.

The Base Camp has all those features, plus two roomy vestibules, great ventilation, enough height to stand in, and a design that allows you to actually utilize all of its claimed floor area. As with most tents, calling it a "6 person" is pretty optimistic unless you're really into the clown car routine. But it's plenty roomy for my family of four. The first night in the tent it rained for a few hours and we didn't get any leaks. Success! The one drawback is that the Base Camp is really heavy, especially compared to my backpacking tents. But it's not really a drawback since it's clearly designed for car camping and that's exactly how I'll use it. If the weight bothers me later, I can lighten it quite a bit too by replacing the steel stakes with aluminum or titanium ones. But at this point, why bother?
Labels: Falls Lake Trip Report