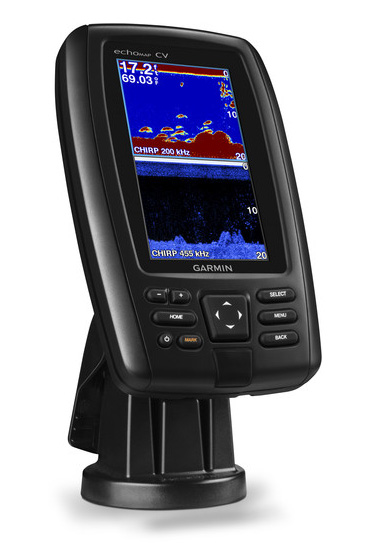 Unlike most kayak fishing things I own, I would not recommend this product to others. Read on to find out why...

When I started looking for a fish finder, I did a ton of research. I familiarized myself with sonar and GPS technology in general so I could understand what the heck the marketing literature was talking about. Then I looked at all the brands you'd expect: Lowrance, Humminbird, Garmin, Dragonfly, etc. I read up on all the models within my budget from those makers. I wanted a good, reliable product and the most bang for my limited buck. In the end, I chose the Garmin echoMAP CHIRP 43cv. At that point in time, the 43cv had a slight edge over it's competition on features for the price. Especially with regards to the included lake charts, which had superior coverage to what was available on the competitive units. Based on the information available at the time, it seemed like a great choice. From a company reputation point of view, you can find both fanboys and highly dissatisfied customers for every sonar brand out there. Garmin seemed to be about on par with everybody else.


A Lean Compromise is Better than a Fat Lawsuit

Several years ago, Navico (parent company of Lowrance) sued Garmin for patent infringement on its down imaging technology. The suit dragged on for awhile, but late last year Navico ultimately prevailed. As it turns out, Navico licenses its down imaging technology to other companies, including its competitors. But instead of licensing the technology, Garmin chose to make some changes to the approach and call it "DownVu" in an attempt to avoid a patent infringement. On the various internet forums, there's been a lot of hand-wringing over whether Garmin really infringed on Navico's patent, or whether Navico should have been able to acquire a patent in the first place. I guess that's interesting to some people, but it's completely academic to me. Because ultimately the courts decided that Garmin had infringed and ordered them to cease marketing its DownVu product bundles. By bundles, I'm talking about the products that come with both the sonar unit and transducer.

At that point, instead of licensing the technology from Navico, Garmin chose to introduce a new technology they called "ClearVu".

At the time I bought my 43cv, Garmin's message to customers and dealers was that ClearVu was simply a new name for their old DownVu technology. It has become known that this was not true. ClearVu has some very important differences that affect down imaging performance.

Specifically, two changes were made: 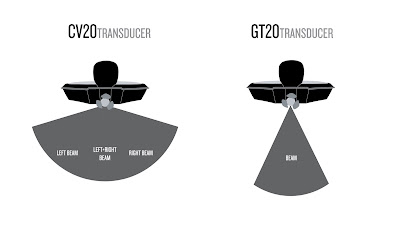 So what's the big deal? Well, the CV transducer included with ClearVu bundles (such as the 43cv that I own) does not include a "down element". A down element is a sonar component that shoots sound waves directly down below the boat. Instead, CV transducers have two side-facing elements that cast wider beams that overlap in coverage below the boat. The side elements do provide coverage beneath the boat. But a limitation of sonar technology is that the return strength is weakest at the edges of the beam. So the bottom of the boat has the weakest signal. The ClearVu software tries to compensate by merging/stitching the two images from the two side elements together. The idea is that one of the elements could pick up something that the other doesn't. But merging two lower quality data sets is, in most cases, not going to create as good of a sonar image as a single higher quality data set from a down-firing element. In most cases, it's going to result in lower quality down imaging. Also, the wider coverage beams used by CV transducers decrease the maximum depth of the down imaging. It should be pointed out however that one benefit of this approach is wider coverage in shallow water, and that is actually a useful thing to have.

Unfortunately, Garmin didn't reveal what was going on under the covers with ClearVu until a couple months after I bought my 43cv. In fact, they were telling consumers and dealers that it was just rebranded DownVu technology.


Hey, We Can Behave Just as Badly!

Not to be outdone in corporate bad behavior, Lowrance is now trying to press their advantage and propagating their own misinformation about this. They made a pretty damning video comparing their "true" down imaging technology to Garmin's ClearVu technology. The video shows the Lowrance unit with a demonstrably better down scanning image. But they also claim that ClearVu has a "gap" in coverage directly below the boat, which does not appear to be true. As I understand it, the coverage is weakest below the boat, but not an outright gap. Moreover, the whole video has a histrionic and negative tone that comes off as unprofessional in my opinion. Lowrance also issued a press release threatening legal action against dealers that sold old DownVu products.

As a person who makes his living in marketing, I have to say this is poor marketing by Lowrance. I expect these measures are only playing well with people who are already Lowrance fanboys. They're probably counterproductive in converting Garmin users, and having mixed results convincing the undecideds. The outcome of the lawsuit and all the ways Garmin has screwed up the situation really speaks for itself. Having won the court battle, it would be much more effective in my opinion for Lowrance to take the high road and not resort to cheap hucksterism and strong armed tactics against dealers who didn't have anything to do with the patent infringement. Apparently neither Lowrance nor Garmin are distinguishing themselves in this mess.

So, what can you do if you're one of the poor saps like me that bought a Garmin ClearVu bundle product?

According to Garmin, the ClearVu software will recognize a GT transducer and utilize its down element. So if you pair a GT transducer with a ClearVu sonar display, you effectively upgrade to the superior down imaging technology. You could try calling Garmin and seeing if they'll replace your CV transducer with the older model GT transducer. But from the accounts I've read on the various fishing forums, Garmin support is not being cooperative at all on that. In fact, some of the reports have Garmin support being downright hostile to customers that had the temerity to ask. Unbelievable! Seriously, how many different ways can they $#@! this up? Having said that, I suspect there are both legal and financial reasons they'd be unwilling to swap transducers. But under no conditions should they be treating customers badly for asking, even if the customers aren't very nice about it. It is possible to say "No" both politely and firmly.

Another option is to buy a GT transducer. For the 43cv that means the GT23M-TM, GT23M-TH, or GT22HW-TM transducers. They range from $170 to $550 new. I suppose you may be able to find one on e-bay or Craigslist. Garmin also has the GT20-TM for $100, but that transducer doesn't do CHIRP, so it would be a downgrade. (Interestingly, the only way to get a CV transducer is to buy it as part of a bundle. Hmmm.)

And then there's the middle finger option: Sell your Garmin and get something else.

For now I'm opting against buying a GT transducer or a different sonar, and I doubt I will change my mind. My reasoning is this: First, when I add the cost of one of the GT transducers to the original purchase price of the 43cv, I could have bought a much nicer unit! Second, it's not clear that the additional investment would bring sufficient improvement for my needs. Since I bought my 43dv, I've been underwhelmed by down imaging. While it is somewhat useful for identifying structure, it doesn't identify fish very well at all. But I've read a lot of feedback from Lowrance and Humminbird owners who aren't very impressed with down imaging either. So I'm not sure if the 43cv's disappointing down imaging is due to the inferior CV transducer. It could also be the small display, general limitations with down imaging sonar, non-optimal settings on my unit, or a combination of all these things. I'm reluctant to spend an additional $170 or more on a GT transducer only to discover that the improvement is marginal and not enough to make it more useful to me. That would be throwing good money after bad.

So I'm just living with what I have. I've spent this whole post writing about a single feature of the 43cv - down imaging. But the myriad other features work just fine and are more useful besides. I use traditional broadband sonar and the 43cv does that quite well. I have a pretty good handle on how to be successful with it. In addition, the lake charts and GPS functionality in the 43cv are excellent. One day I hope someone posts a good youtube video with a side-by-side comparison of the CV vs GT transducers in action. Then I could make a judgement as to whether spending more money would actually be worth it. But given how high the total investment would be, the difference in performance would have to be pretty dramatic. I have doubts that it would be that big. Until then, I'll just continue to rely more on broadband sonar than down imaging.

But I can tell you this. When the day comes for me to replace or upgrade my fish finder, it won't be another Garmin. I think that customers and dealers deserve better treatment than that. And it probably won't be a Lowrance either, for the same reason.


Here are a bunch of links to Garmin Support's knowledge base on this topic: