For today's post, I'm going to combine my last two kayak fishing trips into one report. Especially since the first trip was a bust from a fishing perspective. The second trip more than made up for it though, so keep reading...

A couple weeks ago, my oldest son and my wife went on a scout camping trip. I elected to stay home with my youngest son. The boys' spring break was coming up and we had a trip to Orlando planned for that, so I didn't want to take an additional Friday off work.

So on Sunday, while they were still camping, C and I went fishing.


Fishing with young children isn't really fishing. It's more like being a fishing guide. Or at least what I imagine being a fishing guide is like. A lot of support work helping other people catch fish – picking locations, giving advice, trying to spot patterns, keeping things safe, making sure people have fun, baiting hooks, and unhooking fish.

Actually, I wish there had been some unhooking of fish! We didn't catch anything. We didn't even get any bites. Which I guess means I'm a pretty crappy guide! Water temperature was in the low 60s. I thought we'd get some action, but no such luck.

In the big scheme of things though, it doesn't really matter. C was totally content to be out on the kayak. He likes paddling around more than fishing. And given how poor the bite was, I can't blame him.


C wanted to go ashore for a bit and that sounded like a great idea. It's nice to stretch and walk around a little after a few hours of sitting on a low kayak seat. So I found a clear section of bank in a little cove and we paddled in.


The bank we landed on was at the end of a trail. So it wasn't reachable by car, but it wasn't exactly remote either. It was obvious that it was visited quite a lot. There was a fire pit that people had used. The area has the potential to be a really nice little camp or picnic site, with a lovely view of the lake.

But idiots have been littering all over it.

This is something I'll never understand. You go into the woods to enjoy nature and get away from civilization. You find a nice, serene spot. It's peaceful and beautiful on the lake with just the water and the trees to keep you company. Then you throw your garbage everywhere so nobody, including you, can ever enjoy it again. What the $#@&? The depth of people's laziness and stupidity never ceases to amaze me. At any rate, I think I may make another trip to that bank with a couple garbage bags and haul some stuff out.


The next day, Monday, the entire family drove to Orlando for the boys' spring break. We had a typical Orlando vacation – loads of fun activity, but absolutely exhausting. One of those vacations you need a vacation from when you get back. We returned on Saturday and for most of the drive back, fishing was on my mind. I'd been following the weather and the water temperatures at my home lake while in Orlando and things had warmed up considerably over the week.

Yesterday, the day after driving back, I hit the lake again by myself.

First I tried for bass and crappie using plastic worms and grubs. Spent quite a few hours at it. I saw a lot of fish and bait balls on the fish finder, but they just weren't interested in what I was serving.

In the late afternoon, I switched to targeting channel cats with punch bait. I found a nice little cove and started working it.

I was anchored just inside the mouth of the cove and casting out to various locations, still not getting a bite. I was considering moving on and I reeled in my line. I saw that I had a little bit of bait still on my hook. So I just left it there with my float right next to my kayak.

Less than a minute later, the float plunges down like poor Chrissie from Jaws.


After landing the fish, I thought about where to cast next. Then that little voice of reason in my head said, "You knucklehead, why don't you fish in the same place where you just caught one?!" So I dropped my line straight down into the water and less than a minute later I caught another one. This one weighed in at 4 lbs. 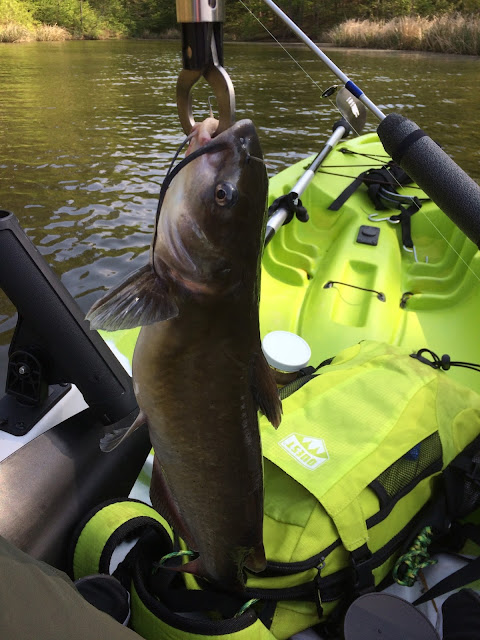 That spot produced fast and furious until I finally had to leave to make it home for dinner. In all, I caught 6-7 fish. I think they may have been attracted to my boat as cover. I just wish my kids had been there as it would have reinvigorated their enthusiasm for fishing.

Some fellow kayak anglers targeting bass paddled by and saw how well things were going for me and I think they were contemplating switching over to catfish too. ;-) Actually that's one of the reasons I like to fish for cats: They're not nearly as heavily pressured on my local waters.

Anyway, my plan was to practice CPR, but I was too slow on my hook set on the second fish and he swallowed it. So I decided to keep him. It didn't make a lot of sense to keep less than enough to feed my entire family a meal. So I ended up keeping 3 and releasing the rest. The biggest one was just shy of 5 lbs, which is a good-sized channel cat for this lake. 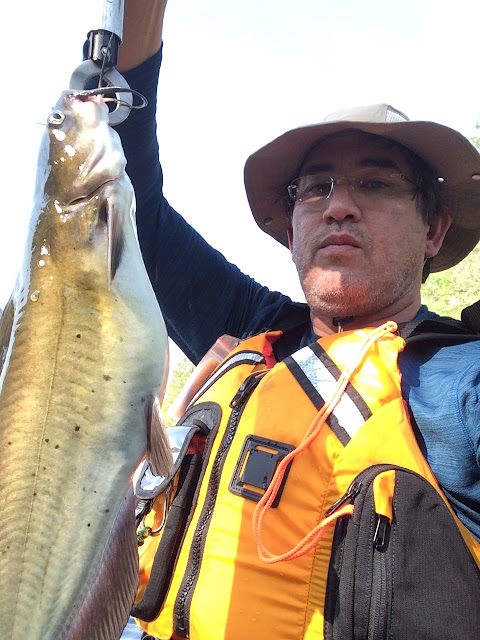 Fishing with a float right next to my boat, I only had about 10 feet of line in the water and very little slack. This resulted in virtually no line stretch when I set my hook and really solid hook sets. On the heavier fish it felt like setting hook on a stump! The lack of stretch also raised the drama of the fight. A 5 lb channel cat zooming under my boat doubled over my rod (a beefy 7.5' medium-heavy) and peeled drag like a much bigger fish. Great fun!

But 10 feet of line also created the potential to boat the fish very green. These spring cats are very feisty. I'm not crazy about the idea of bringing a fish – full of piss, vinegar, and sharp spines – into my little boat to potentially stab my legs or feet while flopping around. I really took my time bringing them in, trying to tire them out a little.

So, the cats on Harris are finally biting again and I'm looking forward to a good season!
Labels: Shearon Harris Trip Report