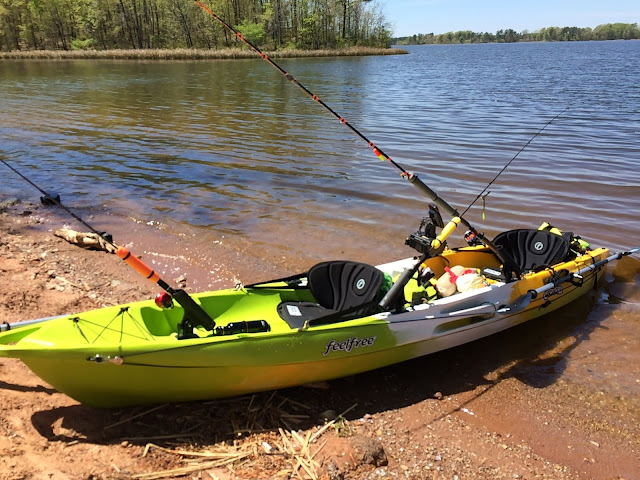 Let's talk a little about outfitting a kayak for fishing. Well, more specifically what I've done on the SS Guacamole.

My kayak is FeelFree Corona, which is a "recreational" kayak. It is not purpose-built for fishing, although many of the traits that make a good recreational kayak – stability, tracking, and ease of handling – are highly desirable in a good fishing kayak too. In fact, FeelFree recently introduced a version of my kayak for anglers which is identical except for a couple of rod holders, upgraded seats, and a camo paint job. So a recreational kayak (or almost any kayak, really) can be turned into into an "angler kayak" by just adding some accessories. That's not to say that there's no difference at all – angler kayaks often have storage facilities, rail mounting systems, electronics mounts, and other features that are quite nice for anglers. But don't let not having an "angler kayak" keep you from kayak fishing!

If you've been reading my blog, you know I'm a bit of a minimalist. I'm highly concerned about weight, size, and complexity. Being light and nimble is a great advantage that a kayak holds over a power boat and I'm loath to give that up. So I resist the temptation to turn my kayak into an angler's Barcalounger.


I have a few basic requirements:

Other than the need to accommodate three people and be able to mount a fish finder in any seating position, my requirements are pretty easy to satsify.

So here's what I've done.

I installed 5 Scotty Rod Master II rod holders. I chose the Scotty system because it's sturdy, proven, and reasonably priced. If you're good with Google you can usually find Scotty holders for pretty cheap. I initially wanted a rail system but once I factored in all the different pieces required, it got overly expensive very quickly. However, I won't argue that being able to move and reconfigure things on-the-fly is a tremendous benefit. I would love to have that capability! I'm just too cheap to pay for it. ;-)

The Guacamole has one molded-in rod holder pad at the bow seating position, so I installed one of the holders there. I also installed a pair of holders each in front of the middle and rear seating positions. I tried to place them far enough from the seating positions to not get in the way of anybody's paddle stroke, but still close enough to reach. However, when 3 paddlers are on board, they still have to be mindful of their paddle strokes. Three paddlers on a 13' boat is a cramped experience no matter how you cut it.


My kayak has accommodations for two more flush-mount holders in the rear tank well. I intend to install those in the near future, giving me a total of 7 rod holders. It's highly unlikely I'll ever have 7 rods on my boat at once, but having the holders available provides more options for placing rods out of the way regardless of the number of paddlers. It would also be handy for adding a safety flag, light, or action camera later. 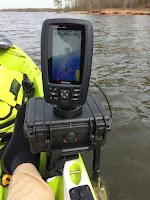 I installed a Garmin echoMAP CHIRP 43cv using a portable install method. I described the install in great detail in this post, but the short story is I can move the fish finder to any of the 3 seating positions.

I installed an H2o anchor trolley on my boat so that I could anchor from the bow, stern, or anywhere in between. In calm conditions this works fairly well for keeping my kayak oriented in a particular location and direction. In unstable wind or current, the best bet is to use two anchors – one on the bow and one on the stern. Deployed correctly, a pair of anchors will keep a boat securely in place and in a particular orientation. But for now, I'm making do with a single anchor setup.

My anchoring system was designed to allow me to detach from it very easily in an emergency and then be able to find and retrieve the anchor later. There are several scenarios where that can happen: Perhaps a monster fish is close to breaking my line. Or a hooked fish is looking like it might wrap the fishing line around the anchor line. Or some speeding basshole's wake threatens to capsize my boat. Or, more likely, I just need to detach from anchor to remove a lure from the bush I just cast it into! The anchoring system allows me to quickly detach, take care of the situation, then retrieve my anchor afterwards. Easy peasy. If you'd like to know more about it, I wrote a post describing it.

I've settled on using bags/backpacks instead of the usual crate. For a typical fishing trip, I store most everything in two small backpacks (one for tackle and another for the anchoring system) and a small cooler. In the anchor backpack I also have a watertight box to hold my keys, phone, wallet, and other things that could get damaged by water. Depending on the contents and the buoyancy, I occasionally tether these items to the kayak. But mostly, I try to keep my tethering minimized for safety reasons.

So that's it. No cup holders, unibars, stabilizers, trolling motors, rudder actuators, bimini tops, stand-up bars, or beach chairs for me. Although I really enjoy seeing how others pimp out their kayaks. I did buy some 1" EVA foam seat cushions to make the seats a little more comfy for long periods. That's my one extravagant accessory. (By the way, they actually worked wonders – a no-brainer for $7.00!)