To Crate or Not to Crate

A messy deck on a small boat is a recipe for problems. It's hard to find things, stuff is constantly getting in your way, and you risk snagging your hook on something. In addition, it adds time to set-up and tear-down, stealing precious minutes away from your fishing. You need some way of organizing, carrying, and securing all your onboard fishing and kayaking gizmos.

It seems that most kayak anglers solve the organization problem with a milk crate: Take a standard crate, attach some add-ons like rod holders and tackle boxes, bungee it into your boat's tank well, and you have a nice cargo solution. There are several benefits to the crate, but after a lot of thought I opted not to have one. I may change my mind later when I discover some kind of fatal flaw with my approach, but here's my current thinking.

First, I should point out some of the advantages of a kayak crate:

So there's a lot to like about kayak crates. Why am I not doing it? Some of the reasons are peculiar to my kayak and some are related to advantages presented by alternative solutions.

First, making a crate work well for the Guacamole requires more effort than simply bungeeing a crate into her tankwell. The rear tankwell on my kayak is relatively small and has a rounded floor, so a standard-sized crate doesn't fit very well. I'd need to build some kind of platform for it - something to lift the crate off the deck and potentially above the gunwales. Also, I need my storage system to keep contents secure in the event of a capsize and with a milk crate that means engineering some kind of lid. Without a lid, every piece of gear that I can't afford to lose would either need to be tethered or made to float. Fabricating a platform and lid are doable, but it's more effort, expense, and maintenance than I think I really need to do in light of other alternatives.

Second, while keeping things dry isn't actually a hard requirement for me, to my way of thinking if I'm going to mount a hard box on my kayak, why not go the extra mile and get something watertight? Otherwise, there are a lot of other interesting alternatives to a box that one could consider. For instance, some kind of bag (like a duffel or a backpack) could be used instead. A bag would be lighter; would secure contents from spilling out in a boat capsize; and can more easily accommodate odd-shaped items. Bags can also be inexpensive and very easily secured to the boat with a bungee or leash. On the other hand, you can't really mount a rod holder on a bag very easily.

Third, I'd like my fishing tackle to still be readily available for use without the kayak. If I want to bank fish with my family, or go on somebody else's boat, I don't want to have to gather my fishing tackle from the crate and put it into a different container. I could just bring the entire crate, but I'd still need to remove the kayak-specific stuff, like the anchor. Also, since you must carry a crate in your hands, it likely means an additional trip between the car and the fishing site or boat. Yuck. Another solution is to buy duplicate tackle - one set for the kayak crate and one set for bank/power-boat fishing - but that's a waste of resources. I simply don't want to buy or carry extra crap if I can avoid it! Ideally, I want to use my little minimalist tackle pack for all my fishing - bank, kayak, or power boat - and I want it ready to go at a moment's notice.

Finally, when I started thinking about how I wanted to rig my kayak for fishing, I realized that I could put as many rod holders directly on the Guacamole as I would need. Up to seven without having to cram them on or go to an expensive rail-based mounting system. So the most compelling reason I could think of for using a crate - additional rod holder space - wasn't really a requirement for me. 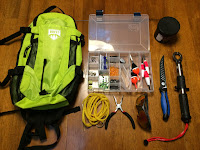 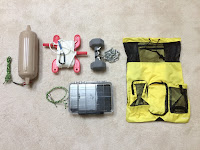 In the end, I decided to just use a pair of backpacks: My minimalist tackle backpack to hold my fishing stuff, and a simple mesh pack to hold my kayak stuff (the anchor system and a dry box for things like keys, wallet, cellphone, flashlight, etc.). Keeping the fishing tackle in a separate pack from the kayaking gear makes it easy to grab-and-go when I want to fish without the kayak.

As for the kayak backpack, I chose mesh because if I'm putting a wet anchor and line in it, then it needs to drain water readily and allow stuff to dry out inside. Amazon has several mesh backpacks to choose from, most of which are intended for swimming or scuba gear. I got one that was inexpensive, highly rated, and came in a large variety of colors. Admittedly, it's nowhere near as rugged as a crate, but it seems up to the task of holding its intended contents. I like the fact that it's easily secured with a leash and I have the option to carry it like a backpack during portage.

So I'm bucking convention for storage on my fishing kayak. I may discover that there's some other very compelling reason to have a crate that just hasn't occurred to me yet. Or maybe I'll find a crate that's the right size and rig one for fishing just because I can. But I think this approach works well for my purposes and is very flexible.