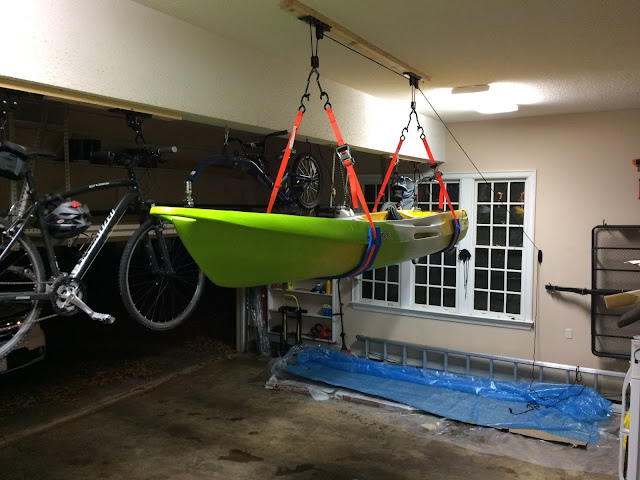 If you're an urban (or suburban) dwelling kayak angler, one potentially vexing decision you'll have to make is how to store your boat. It makes a difference in the lifespan of your kayak. And depending on how you do it, it can also make a big dent in the storage capacity of your home.

For me, storing a kayak outside is not an option. Besides the accelerated wear and tear, I have a fickle and nosy homeowner's association to contend with. So I wanted it in the garage.

Unfortunately, despite the fact that I have a 3-car garage, it's pretty close to being at full capacity. And the walls of my garage are pretty well taken too with shelving, windows, doors, and workbenches. Suspending my kayak from the roof was the obvious answer.

I've been using hoists to store bicycles for several years and it's worked out really well. I had an extra bicycle hoist, so I adapted that for my kayak. I love that hoists use what would otherwise be wasted space in the garage. They're also ideal for single person operation as opposed to lifting the kayak onto a rack or shelf system. The bike hoist's capacity is 100 lbs, which is 25% more than the kayak weighs and the straps are rated at 1250 lbs, so there's enough capacity buffer in the system that it should be safe.

I found a helpful page on the web that gave the optimal distance between the suspension points because if you don't get it right, you can warp the kayak over time.

On the hoist, there are two claws attached to movable pulleys. The claws were designed to hold a bicycle up by the seat and handlebars. They were originally bent at 90 degrees, which is fine for a bike but didn't seem very safe for a kayak. I tried to replace the claws with stainless steel quick links but I couldn't attach them to the pulleys without major surgery. So I ended up simply bending the claws upward to ensure that the strap hooks don't slip off of them. It wasn't easy because the claws were quite heavy duty and hard to bend. But it worked and it's a simple and effective solution.

I cut some strap pads from a closed-cell foam camping pad and threaded them onto the straps. All the kayak's weight concentrated at the narrow strip under the strap could deform the kayak, especially during the summer in a hot garage when the plastic softens. So the strap provides cushioning and distributes the weight over a wider surface area.

Hanging the hoist was logistically a hassle because my garage ceiling is so high. I actually had to rent a tall ladder to get up high enough. But it went into the ceiling joints with big lag bolts, so it's very securely mounted.

Of course, hanging a big 80 lb object over my cars made me a little nervous. If it came crashing down, it wouldn't be pretty. So for the Guacamole's first night in the hoist, I parked the cars outside and suspended her only a few inches off the ground in case there was any sort of infant mortality failure with the hoist or my installation. And even now I visually inspect the whole thing very frequently.

One practice I've adopted is to change up hanging the yak right-side-up and upside-down. Even though I've got the suspension point locations optimized, I'm still a little leery of warping the kayak when suspending it from two points in the summer heat or for long periods of time. So I alternate between right-side-up and upside-down every few weeks or so. I even set calendar reminders on my phone to help me remember when it's time to flip the burger.
Labels: Kayaking Gear