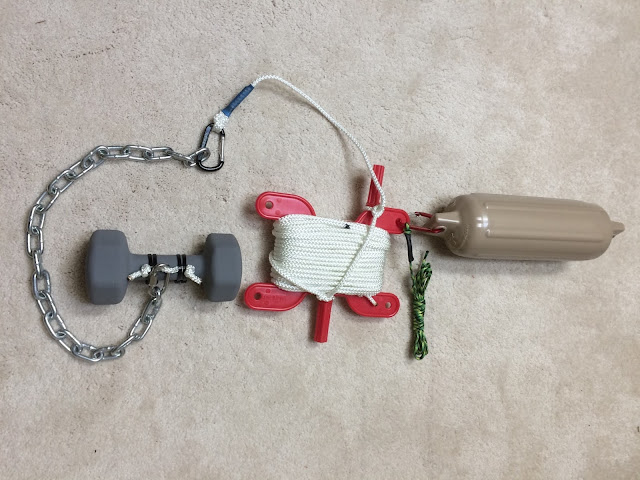 One of the key items when rigging your kayak for fishing is an anchoring system. Most of my fishing is done on impounded reservoirs and easy-going rivers. While anchoring isn't quite as crucial a safety concern in these sorts of calm waters, it's still important to be able to stay in place and oriented in a single direction while fishing.

I've done a lot of reading about different approaches to kayak anchoring on the various forums and blogs. I even bought a kayak fishing book that had a decent discussion about it. On a full-sized boat this is easy: Get some kind of anchor and line, throw it overboard, and tie it off on your boat. Done. But a kayak isn't so simple and there are a surprising number of things to consider, some related to safety, and some related to convenience.

It was really tough to balance simplicity with convenience and safety. I didn't want a complicated system with too many parts, too many things to remember, and too many components to fail. In fact, I'd love to just have that anchor and line that I could tie off to a cleat on my boat. But tying off an anchor line to a bow or stern cleat can be a tricky proposition on a kayak due to the potential for tip-over. The system had to be a little more elaborate. But whatever the system, it's gotta work, work reliably, and work without much hassle so I'm not discouraged from using it. As Einstein supposedly said, "Everything should be made as simple as possible, but no simpler."


Given my usual paddling locations, I decided to start with a single anchor. This might not work out - in some conditions, it's necessary to anchor off both the bow and stern to maintain the boat's orientation. But I can always add another anchor if the single anchor system isn't cutting it.

In order to maximize flexibility for orienting my kayak on a single anchor, I'm using an anchor trolley. An anchor trolley allows me to anchor off the bow, stern, or anywhere in between without ever leaving my seat. And in a stable current/wind, that allows me to orient the boat in almost any direction. I bought an H2O Kayak Anchor Trolley off Amazon. The user reviews are pretty positive on it and the price was only $20.

Given that my "home lake" is 50 feet deep in some areas, and I know I'll fish those areas in the winter, I needed some way of managing a relatively long anchor line. For that I got a simple plastic rope winder that I can wind my anchor line onto quickly and easily.

For both safety and fishing-related reasons I wanted some kind of quick release mechanism to instantly detach from the anchor line. The traditional approach would be to tie the anchor line to an ordinary cleat using something like a highwayman's hitch. The only issue with that is locating the cleat on the kayak. It needs to be readily accessible from your seating position, but clear of your paddle stroke because banging or scraping your hand on the cleat is not fun. I went a different route and got a Nite Ize CamJam. It has a clip on one end, and a quick-release cam on the other which you thread your rope onto. I clipped the CamJam onto my kayak's side handle and my anchor line is secured in the cam. Pulling the line from the anchor side, the CamJam holds the line very securely. But pulling the tag end of the anchor line disengages it instantly from the CamJam. So in an emergency, I just pull the tag end and I'm free. It couldn't be easier or faster. The CamJam is also small, unobtrusive, and well out of the way of my paddle stroke.

If I detach from anchor using the quick release, I need some way to retrieve the anchor and line later; I don't want it to sink to the bottom of the lake! So I got a small boat fender as a float so that my anchor line can be found and retrieved.

The anchor line has the anchor (and chain leader) on one end and the winder on the other. The float is clipped onto the winder using a regular carabiner. I tie it all to the CamJam on the kayak using a 10' length of paracord attached to the float carabiner.

The anchoring procedure is to drop the anchor into the water, letting out line from the winder. When sufficient line has been let out, the excess line is secured on the winder using a couple of slip knots on the winder handles (as shown in the photo on the left). The winder and attached float are thrown into the water (keeping hold of the paracord, which is attached to the winder and float). The tag end of the paracord is threaded through the O-ring on the anchor trolley and the O-ring is positioned as desired, typically at the bow or stern. Finally, the tag end of the paracord is threaded through the cam on the CamJam and pulled snug. Now the boat is anchored. When you write it all out, it sounds a lot more complicated than it is! It's actually quite easy to deploy.

In an emergency situation, I simply pull the tag end of the paracord to unhook it from the CamJam and let it go. The paracord will slip out of the trolley O-ring on it's own, and the kayak is completely untethered from the anchor. The anchor, line, winder, and paracord are all attached to the float so everything can be found and retrieved later after the emergency is dealt with.

It doesn't even have to be an emergency. More often than not, I use the quick release if I cast my bait into a tree, or if it gets snagged on something in the water. I can detach from anchor very easily and paddle towards the snagged hook to work it free. After I've unsnagged my hook, I paddle back to the anchor float and reattach to the anchor. That's a lot easier and faster than pulling up the anchor and then redeploying it!

The toughest decision was what kind of anchor to use. When I had a power boat several years ago, I had to cut line and abandon a few claw and grapnel anchors that I just couldn't disengage from the lake bottom. I hated doing that because it was such a colossal waste of money! On a kayak it can be even harder to unstick an anchor because a kayak is so light that it's a very unstable platform for pulling the anchor. For the kayak, I decided to use a 10 lb dumbbell as my primary anchor. This was a difficult decision because there are situations where this is simply not a good idea. For example, in the ocean or a fast-flowing river, if you lose your paddle you may need a rock-solid anchor to keep you from being carried out to sea or into dangerous sections of the river! In those kinds of waters, it would be foolish to anchor with a dumbbell! But most of my paddling is on reservoirs and I am very diligent about following the weather forecasts. A kayak is so light that it doesn't take a lot of weight to secure it in these calmer waters. So I decided to use a deadweight anchor, with a dumbbell being an inexpensive and convenient way to do that. I also have a 3 lb. grapnel anchor on hand for whenever the situation warrants it because there are occasions when I get on rivers with more current.

To turn the dumbbell into an anchor, I attached a small (6 inch) piece of rope with knots on each end to my dumbbell using heavy zip ties. This created an attachment point on the anchor to which I attached my anchor chain using a stainless steel quick link. The chain is attached to the anchor line using a carabiner.

You can see the entire system interconnected in the photo at the top of this post. 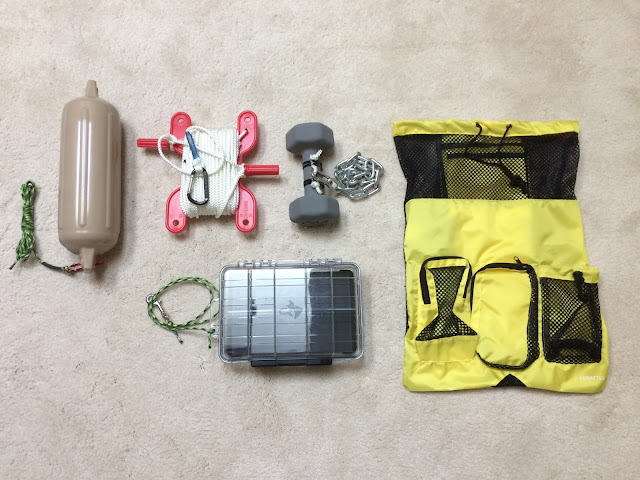 The last part of my anchor system is mesh backpack to store it all in. A fair amount of thought went into that decision as well. So I'll save it for its own post.