Outfitting a kayak for fishing generally means having to fasten things to your boat. For this post, I'll talk a bit about the primary methods you can you use to do that.

It's kind of nerve-wracking drilling holes into your boat the first time. One, the boat might be new so there's that. But more importantly, drilling holes by definition means your boat now has a potential leak. But once you install your first thing successfully you realize it's really easy and nothing to get worked up about. Plastic is relatively soft and easy to drill into, so the physical aspect of it is no problem. The most critical thing is to make sure you put the hole exactly where it needs to be. Drilling a hole in the wrong place or, worse, deciding you installed your rod holder in the wrong place is not good. Repairing a hole in a poly kayak can be done, but it's a bit of a finesse job to do well so you want to avoid putting yourself in that situation. 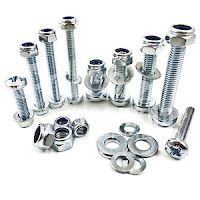 The strongest fastening option is a machine screw, washer, and locking nut. Ideally you'd always go this route. However, tightening the nut requires access to the nut from the inside of your kayak. If you have a sit-on-top yak, and there's not a hatch near the install location, this may not be an option. But if it is, machine screws and locking nuts are the way to go. Buy stainless steel screws, washers, and nuts for corrosion resistance. Plain steel hardware will rust very quickly. Zinc plated hardware is technically corrosion resistant, but the plating is extremely thin and scratches/wears off quickly. It's really only good for indoor use. You want stainless.

If there's sufficient room on the inside of your kayak where you're mounting the accessory, I recommend using fender washers since the increased surface area provides more insurance against the screw ripping out of the hole. Some accessories have backside mounting plates. These are even better. If you don't have enough room and the accessory doesn't have backside mounting plate, then a standard sized washer is fine.

I highly recommend locking nuts. They're much less likely to work themselves loose over time, meaning you won't have to go back into the kayak to tighten them up. 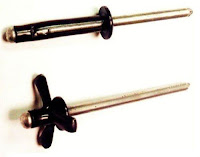 Pop rivets are easy to work with and they're "blind" fasteners. In other words, they do not require access to the inside of the kayak. They do require a specialized tool - a pop rivet gun. But rivet guns are inexpensive and easy to use. Rivets aren't as strong as machine screws and nuts, but they're fine for most fishing accessories on a kayak.

The way a pop rivet works is a pretty clever bit of engineering. The fastener is an assembly of two parts. There's the actual rivet itself (the black part in the photo), and then there's something called a mandrel (the silver part), which is a throw-away piece used to install the rivet. The mandrel looks like a finishing nail and runs through the rivet assembly. The pointy end of the mandrel is gripped by the rivet gun. The actual rivet is on the other end of the mandrel and has a head (in the middle of the assembly) just like every other fastener. You insert the mandrel into the gun, then place the other end of the assembly (the actual rivet) into the holes in the accessory and the kayak. You want the rivet head to be firmly seated on top of the hole. Then you squeeze the handles of the rivet gun, and the gun pulls the mandrel. The tail end of the rivet is designed to buckle when the mandrel is pulled by the rivet gun. It collapses and essentially forms another head on the inside of the kayak. You keep squeezing the gun until the mandrel releases from the rivet and voilà - you have a nice, tightly fastened rivet!

The way in which the tail end of the rivet collapses can vary depending on its design. For kayak rigging, you want "tri-grip" rivets. These buckle into 3 relatively long prongs that stick out from the center of the rivet, providing a nice wide area to keep the rivet from ripping out of the hole when exposed to forces from the outside (like a big fish!). You also want aluminum rivets for corrosion resistance. Yak anglers seem to really like the Yak Gear Tri-Grip rivet. 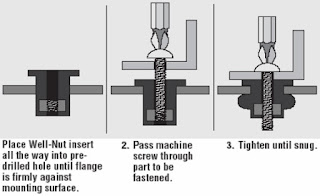 Another blind fastening solution is a machine screw with a well nut. A well nut has a rubber bushing with a nut embedded in one end. You put the well nut into the hole on the kayak. Then you insert the machine screw through the accessory you're installing, and thread it into the well nut. As the screw is tightened, the bushing is compressed by the nut, forming a lip on the inside of the kayak which holds the bolt and seals the hole. The principle is very similar to a rivet actually, except you can use a regular screw driver to install it.

Personally, I'm not a big fan of well nuts, although people use them successfully all the time. One advantage is that the rubber bushing probably does a good job of sealing the hole from water leakage, especially if you also put marine sealant on the hole. But the thing I don't like is that the bushing is rubber so my intuition tells me that the shear strength won't be as good as a regular locking nut or even a good rivet. (Maybe my intuition is wrong. Please feel free to relieve me of my ignorance if I am!) Second, you have to drill a lot bigger hole in your kayak to accommodate a well nut than you would a regular screw or a rivet. So if it does rip out, your only choice is to install another well nut because the hole will be too big to switch to another fastener type.

Once again, you want the metal bits to be made from stainless steel. You can buy well nuts and screws that are marketed for "marine use" that will be made of the proper materials. 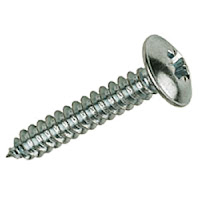 The last fastener I'll talk about is the self-tapping screw. This is your garden variety screw with a tapered shank and no nut required. It is also a blind fastener. You drill a pilot hole which is a little smaller than the screw diameter. Installing the screw embeds the threads into the kayak plastic and that's what holds everything in place.

This is my least favorite fastener for kayak rigging. The threads are small, the wall of a kayak is thin, and the plastic is relatively soft. So there's not much holding the screw in against strong forces pulling on the accessory from the outside. (I'm optimistically thinking "big fish" here...) If I did use one on my kayak it would be for something light-duty, like maybe a pad eye for a bungee cord. But even then, it's just as easy to use a rivet so why bother? Anyway, if a self-tapping screw rips out, your options are to either use a bigger screw (if the accessory will accommodate it) or drill it out and use one of the other fasteners I've discussed.

Like all the hardware I've talked about, if you go with a self-tapping screw, make sure to get stainless steel ones. 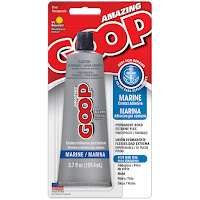 For all of these fasteners, you need to seal the hole you drilled in your kayak with marine sealant. Sealant is what makes your kayak water-tight again after drilling holes in it!

Not all sealants are the same. Some are mainly just for water sealing, while others are also high-strength adhesives (i.e. glue). It may seem like you want the strongest adherence you can find, but that's not always the case. Anything that you might need to remove later, you should not seal with a strong adhesive because you may not be able to remove it without damaging the part or your kayak. In those cases, you need to depend on the fastener for attachment strength and use the sealant just for waterproofing. If you intend something to be permanently attached, then going with a strong adhesive is a good idea.

No matter what kind of sealant/adhesive you choose, you need to use a "marine grade" product. There is a difference. The marine grade adhesives/sealants are UV resistant and are formulated to hold in wet conditions. Some of the strong adhesives are even good for below-the-waterline applications.

In the sealant-only category, a silicone product, like 3M Marine Grade Sealant is good. I use DAP Marine Sealant because I can find it easily at the local stores.

A very good strong adhesive is 3M 5200. It is suitable for below-waterline use. If you seal with 5200, it is going to be very hard to remove that part later, which may be exactly what you want.

Somewhere in between would be something like 3M 4000, which is still very strong. Maybe too strong if you want the ability to remove the part later. Another very popular adhesive/sealant that I would categorize as "medium strength" is Goop Marine.

No matter which sealant you choose, what you do is put a small glob of it on or around the hole before you insert the fastener and accessory. Where you can, put sealant on both sides of the hole. Don't be stingy with the stuff, but there's no point in just heaping it on either. The coverage needs to be thorough, but it doesn't need to be really thick, if you understand what I mean.

For rivets, you also want to seal up the hole at the top of the rivet where the mandrel was inserted. You should do this even if you left a piece of the mandrel in the hole to plug it.

So there you have it. If you can drill a hole, use a tape measure, and manage one or more of these fasteners, you have 90% of the skills required to rig your kayak!