My kayak had been hanging in the garage for a couple of weeks just looking forlorn as I waited for free time and the weather to cooperate in letting me take her out on the water. Finally got my chance yesterday. Mostly cloudy, highs in the upper 60s, very light winds. About as good conditions as one can hope for in late December.

I was only on the water for about an hour and a half, but it was a lot of fun.

No matter how careful you are on a kayak, you're going to get wet and you should just accept it. Getting wet in December reminds you of that in a visceral sort of way. It didn't help that I forgot to install my scupper plugs! I realized it just as I was putting in, but the plugs were at home so I just accepted that I'd be sitting in some water. It wasn't that bad though. For the most part, the seat kept me out of the little bit of water that got in the boat.


The Guacamole handles pretty well when solo paddling, but that's not her forte. She rides kind of like a Cadillac – easy-going, cushy, comfortable, but not very agile and kind of ponderous feeling. Two paddlers make this kayak easier to propel and maneuver, especially if those paddlers are sufficiently in-sync. But one of the reasons I got a kayak was for the exercise, so I'm fine with solo effort.

I haven't ever stood up in this boat. But in the spring when things warm up, I'm going to make a point of trying it. I'll do it near the shore and if I capsize I'll use that as an opportunity to practice re-entry while on the water. But in the colder months, anytime you don't capsize that's some kind of success! 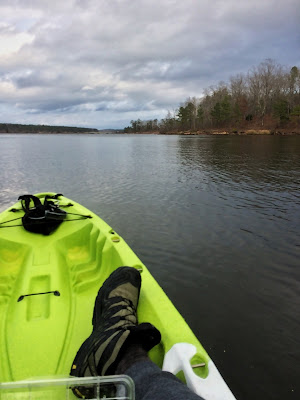 A picture of my right foot. Yeah, I'm stone-cold crazy.

Kayaking works muscles that you probably wouldn't normally use much. Even with that short time on the water, I feel some mild muscle aches today. Nothing bad, but enough to make me aware of it. I did hustle it across the main channel of the spur of the lake that I was on. Twice – there and back. That's probably a few hundred yards each way and I did it quickly without stopping because that channel is where the power boats zoom down the lake and I like to stay out of their path as much as possible.
Labels: FeelFree Shearon Harris Trip Report
Location: 5421 Shearon Harris Rd, New Hill, NC 27562, USA